10 Things You Can Expect From Your College Roommate(s)

July 31, 2013
There are lots of things about starting college that are enough to cause even the most stalwart amongst the incoming freshmen to cringe. Perhaps one of the most daunting aspects about starting your college career is the fact you'll be moving in with someone (or more than one, depending on housing situations) that you've never met. Most colleges require that freshmen live in the dorms during their freshmen year and will assign roommates which means you'll probably wind up living with people you have no idea of.

Here are 10 things you can expect, or not expect out of your new roommate and some ideas on getting along:

1. Expect them to have their own opinions. They've lived their lives, listened to the opinions of their friends and family and have formed their own ideas about the world and their place in it. This can be as simple as the foods they like and don't like or as complex as their religious beliefs. While some banter and razzing is OK, especially when it comes to sports on TV or fashion ideas, accepting that their beliefs are sacrosanct and will only cause problems if not essentially left alone can make life much easier. 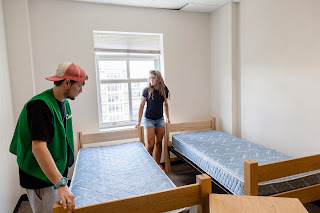 2. Expect them to have a different schedule than you. Their classes are different, the friends they make will be different and their extracurricular activities will be different. Even though you'll be able to share some things, they'll be pursuing their lives so you'll want to pursue yours. It's easy to fall into the "roommate trap" of trying to become each other's best friend. While being friends is good, historically it isn't a requirement for people to co-exist in a dorm room.

3. Expect them to have different cleanliness habits. While most people are reasonably neat and clean, some people will fall far outside that median average. The hardest roommates to get along with are the complete slobs and the compulsive neat freaks. If you are the slob or the neat freak, keep in mind you'll need to change your standards in order to get along. It may be uncomfortable or more of an effort than you're used to, in order to keep the peace, making that effort is worth it. 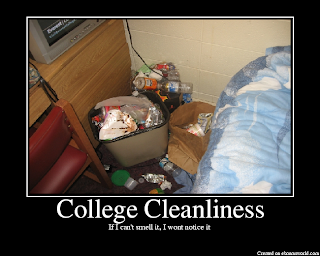 4. Expect them to overstep boundaries. Even a married couple oversteps boundaries and tossing two or more people into a living space that don't know each other will mean this will happen. It could be something as simple as having friends in while you're trying to study, coming in late at night when you're asleep or even swiping a soda and not putting it back. Be aware that you'll be overstepping boundaries in practically the same ways, so cut some slack. Do draw lines and point out the boundary, but don't be overcritical about it.

5. Expect them to be annoying at times. There are times in any relationship (and, yes, being roommates is a relationship) when you find the other person as annoying an individual as you've ever met in your life. Their voice, their habits, the way they chew and even the way they smell is the last straw. The best thing to do then is to get out and go do something. Hang out with friends somewhere besides the dorm. Go with a friend and watch a movie. Changing scenery and people will help. They may still be annoying when you get back, but you'll have something to balance that with. Keep in mind, they'll find you the same way at some point. 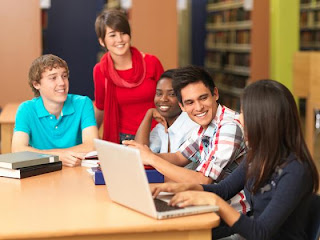 6. Expect who they are to change. As the year goes on, they'll be finding new friends and new places to go. Some of their attitudes may change, their vocabulary may change and even the way they dress and look may change. This is especially true if they're pledging a fraternity or sorority as those lifestyles start to impact their daily lives. Or yours, if you're doing the pledging.

7. Expect their economic conditions to be different. Some people have more money than they know what to do with, of course, but some are getting financial aid. Regardless of your own situation, stick to your own personal budget and let them handle theirs. Don't try to "keep up with the Joneses" and wind up blowing your budget to pieces in the process.

8. Expect to not like them or for them to not like you. Let's face it, In your life, you have few people that you genuinely like. Most people are OK, and some people you'd move across the country to avoid, but being tossed into a dorm situation means it is simply statistically improbable that you and your roommate will be best friends forever. This means you'll need to find ways to co-exist without throwing the other person out the window.

9. Expect the unexpected. When dealing with people, even though you may come to know them fairly well, their lives are different than yours. Accidents happen, things happen at home, etc. This can have a huge impact on your roommate, or even on you. Giving each other space to let things happen can keep a roommate situation stable 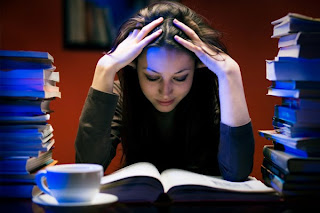 10. Expect your roommate to change next year. Either you'll change roommates to move in with someone you feel is more compatible or they will. Remember, while colleges will put people together, seemingly at randon, they aren't inflexible when it comes to changing roommates. Change is truly the only constant in life, so expect change.

Being a good roommate and dealing with your roommate in return is an exercise. Sometimes good things come out of it and friendships are developed that last a lifetime. Sometimes, its an exercise in futility. Starting a college career can be a truly challenging situation and maintaining a reasonable, healthy relationship with a roommate by knowing a few things to expect before hand can make college life a lot easier.