So You're Gonna Be A College Athlete: How to Be a Champion On The Field & In The Classroom 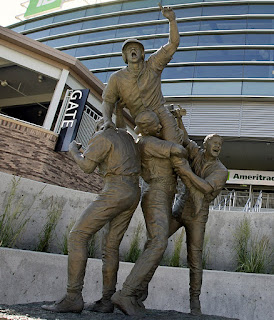 Summer is halfway over. Soon, you're going to be starting college for real and playing a college sport for which a coach actually recruited you. Let's assume the sport is baseball. Let's further assume that you haven't been recruited to play at the University of Miami, Stanford, the University of Virginia or the winner of this year's College World Series. You're an above-average player and, according to the slots available and probabilities, you're probably in a NCAA Division III program. (Even if you're in a fairly big time Division I program, you might want to finish reading this article. A significant number of you guys get tired of being bench jockeys and transfer to D III's for playing time and the ability to be a stud player in a small pond.)


Status Check - What the NCAA Calls You

The NCAA refers to you as a "student athlete" in all its many publications, forms, notifications and rulebooks. The term is never accidentally or intentionally reversed and it should be a major clue to you as to where the National Collegiate Athletic Association wants you to place your priorities: the classroom first and the field second. This isn't just a "feel good," "study hard" pat on the back. Rather, it is a significant stick the organization can use to keep you off the field if you haven't spent enough time or effort in class. Most coaches will requires that you turn in grade and class progress reports to them throughout the year. This isn't recreational reading material for them. If your grades fall below a certain level, the NCAA, your university or both will disqualify you from playing your sport until your grades improve the following semester or even the following year. So, get up and go to class. Do your homework. Study for your tests. Most athletic departments and some athletic teams have mandatory or voluntary study halls throughout the week along with tutors to help you learn to study or learn your class material. Use them.

The NCAA allows D III schools a short "Fall Ball" season that consists of a limited number of coach-monitored practices, uncounted captain practices and two nine-inning competitions with other schools that usually conclude the season. This little mini season generally takes a month to complete and starts depending upon the Head Coach's preferences and where your school is located. Some programs like to give players a couple of weeks to get into the swing of classes and college life. Others wait until almost October to begin formal activities. About two-thirds of the way through the Fall Ball season, some programs will divide the team into squads and play a series of "World Series" games with team’s names after two of the school colors. The Fall Ball period helps you get to know your teammates. More importantly, it helps your coaches get an excellent idea of your abilities, team spirit, sportsmanship and hustle. Some programs cut players during or after Fall Ball. Smaller programs usually don't. But you will meet with the coaches and discuss your current playing level, what improvements they'll expect over the upcoming year and how much playing time you might get. You will also get instructions or a printed workout for you to continue throughout the winter until the season begins.

College baseball practice begins in early January and the season begins four to five weeks later. Remember that workout the coaches gave you at the end of Fall Ball? They expected you to do it and if you didn't, you are going to stand out and in a bad way. At this stage, you need to have some significant time management skills under your belt, as you'll be juggling schoolwork, practice and pre-season workouts. The tempo will only increase when the real season begins and you travel to at least half of your games. You made miss classes during travel and it is your responsibility to coordinate make-up arrangements and excused absences with your professors. Just because you're on a bus or in a van, doesn't mean you can't bring along a textbook for reading. You will need to pack your sports gear and your study materials. This is not travel team ball that your parents paid for during your high school summers. You will not be staying overnight in Hilton Suites and don't even think about bringing your bathing trunks. Mom and Dad could take you to Outback after every summer team win, but you can rest assured that your team's meal budget is not going to allow such extravagances. Whining doesn't improve the menu. Eat food as fuel, get as much studying in as you can on the road and play well.


Playing a team sport in college is one of the most rewarding experiences you can experience. It is, however, a hard lesson in time management, sportsmanship and team play. Check out this interesting video and get a step up on the competition. Or for more information on college athletics click here.


Roll call! Shout out your college sports team in the comments below.