History of The Harlem Shake Timeline

February 22, 2013
In Rucker Park, NY in 1981, a street ball tournament was in full swing. Called the Entertainer's Basketball Classic, it was founded in 1980 to feature the best street players and notable basketball players in that profession. People would flock to Rucker Park for some thrilling entertainment for over 25 years.

This street ball tournament also attracted a man calling himself Al B. Al B was a Harlem resident who would wait for the breaks between basketball tournaments. He would walk onto the court and do his unique style of dancing that involved shaking his arms and doing jerky movements of the upper body. His dance caught on with the spectators, as it was soon called the "Albee" in the areas of Harlem and Rucker.

When asked about the dance, Al B has been quoted to say that the dance moves are in many ways a drunken shake, much like what alcoholics would do. He credited the ancient Egyptians with the dance move, saying it was what mummies would do when wrapped up in their bandages. Since the mummies couldn't move, all they could do was shake about. This unique style of dancing was also credited to the Ethiopians, who had a similar dance named Eskista.

As the news of this dance trend started to spread, the name was changed from the "Albee" to "The Harlem Shake." Although it was well known in Harlem, Rucker and other areas of New York, it never really caught mainstream attention several years later.

The Harlem Shake Hits Mainstream In 2001

It took about 20 years and a music video for people nationwide to find out about this Harlem dance move. In a music video called "Let's Get It," a hip-hop singer called G Dep and his dancers put on The Harlem Shake dance. Yet most people recognize a few of the dance moves in an earlier music video by G Dep called "Special Delivery" that first appeared in 1998.


This dance was taught to G Dep by the choreographer Moetion, who would later go on to teach the singer Eve and the rapper Jadakiss as they would also feature the dance in their music videos. While given credit that he was the person who brought the dance move to the masses, Moetion admitted in 2006 that Al B was the founder of The Harlem Shake.

The Harlem Shake Threatened With Extinction

During the intervening years from 2006, the Harlem Shake has spawned similar dance moves by other music artists. "The Chicken Noodle Soup" dance appeared in 2006 by DJ Webstar and Young B. From then on, there have been some type of version of this dance featured in music videos. 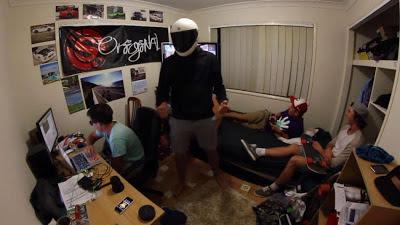 Unfortunately, it is the current Internet age that threatens to erase all traces of this historic dance move. In May of 2012, DJ producer Baauer released a song called "The Harlem Shake." The electronic dance music developed a following and became a hit when the comedian Filthy Frank used the song in a video that he uploaded to YouTube in February 2013 (it's dubbed "The Harlem Shake Meme"). Filthy Frank's video went viral and has received 4.5 million views as well as spawned over 8,000,000 other versions of this meme uploaded as YouTube videos. People have danced in their underwear outside in the wintertime to doing the "supposed" Harlem Shake while skydiving.

But Harlem residents have been quick to point out that the Harlem Shake Meme is not the original Harlem Shake once performed by Al B. Critics have also been quick to voice their concern that the original African American dance with roots in Harlem could be lost due to this meme craze. For those people outraged and offended by the meme, they are hoping the craze dies quickly and disappears, not causing irreversible damage to the original dance move once held in awe on the basketball court in Rucker Park in 1981. Yet the damage may have already been done. When the topic of the Harlem Shake comes up, it may be quickly associated to the brief dance craze and dismissed without people contemplating where it was originally founded.

There is no way in telling whether the original Harlem Shake will survive from this re-creation, or outright stealing, of its dance moves in a meme mockery done by a comedian to get a few laughs at his YouTube video. It will have to become a waiting process to see if the history of The Harlem Shake survives and can be remembered by this generation who has become dependent on obtaining their entertainment from YouTube videos versus watching the original dance moves of someone enjoying his favorite dance at a park.